The Institute of Chemical Engineering is the Bulgarian Research Institution involved in process engineering based on the principles of unit operations. The chemical, biochemical, food, pharmaceutical industries have been principle targets of the studies both nowadays and historically as a background. Correspondingly to the basic branches of engineering science, the Institute Research Departments are three: Chemical and Biochemical Reactions and Operations are studied in the Chemical and Biochemical Reactor Lab; Separation science in gas-liquid and liquid-liquid systems is represented by the Laboratory for Transfer Processes in Liquid Media, and simulation of large-scale chemical plants is the subject of a Process System Engineering Department. So far, computational flow modeling by commercial software (CFD) is included in studies of chemical reactor equipment and in mixing research. The activity is useful and has been employed both in chemical and biochemical reactor analysis, food processing and in the pharmaceutical industries and thus has vast prospects for development.

Being the principle distributor of CFD software in South Eastern Europe, SimTec have been a helpful partner of the Institute of Chemical Engineering at the Bulgarian Academy of Sciences for more than ten years,. The increasing interest in the area by a group of the Institute (c/o Prof. Serafim Vlaev) led to a natural purchase of the Fluent version 5.5 in the early 1999. It was extended later into Fluent version 6. The ‘mixing reactors’ group rearranged all their research projects into projects engaged with CFD methodology and thus upgraded the studies positioning them into another elevated level of technical perfection and research effectiveness.

The group took part and gave papers and poster reports in all UGM events organized by SimTec, namely, in Thessaloniki, Porto Carras and in Istanbul. A special event accompanied by a session on computational fluid dynamics was organized at the Bulgarian Academy of Sciences in Sofia where larger publicity was achieved by inviting specialists from all over the country. Following this meeting, a joint paper was planned and submitted at the 1st South-East Europe Congress of Chemical Engineering in Belgrade (25/28 Sept. 2005) co-authored by O. Faltsi, S.D. Vlaev, D. Sofialidis, and J. Kirpitsas, entitled «Novel Areas and Future Trends of Computational Fluid Dynamics Software Applications in Chemical Engineering», published later in Chemical Industry & Chemical Engineering Quarterly (CI&CEQ 12 (4) 213-219 (2006)).

In 2010, the CFD initiative at the Institute was extended further by the ANSYS software recent version 13, another license and upgraded platform. This allowed larger multidimensional and multi-parameter tasks to be solved.

In what follows, we illustrate our activity with two important issues that have given the start of numerous analyses and project studies. (The old studies were summarized in Belgrade!). In accordance with the main activity of the Institute, the works are related to basic research and development, but they are used also in education and assignment of academic degrees, as well as for international cooperation. The projects have been realized by Serafim D. Vlaev, Dobrin Georgiev, Martin Martinov and Roman Popov in cooperation with microbiologists (Konstantsa Pavlova, S. Videva) and foreign collaborators in Hungary (Dr. Sisak) and in France (Prof. Nikov and Dr. M. Elqotbi). 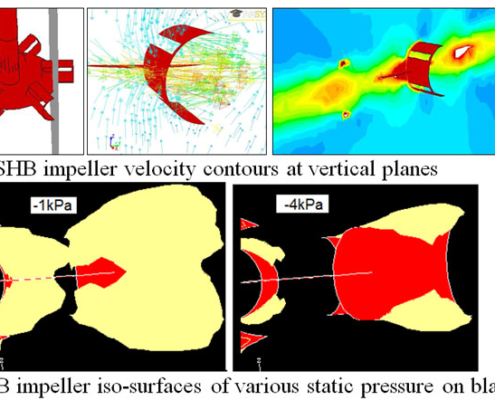 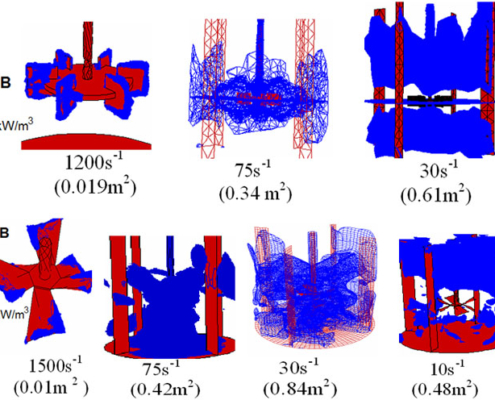 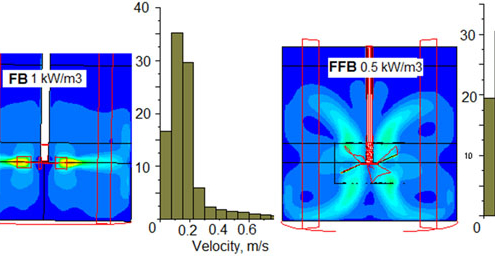 CFD simulation of impeller performance in bioreactors producing exopolysaccharides has been carried out to study flow performance deterioration at viscosity/consistency rise. Stagnant zones have been uncovered to predict substrate and oxygen depletion. Optimization steps were carried out to neutralize flow field deterioration by variation of mixing intensity and retrofitting of mixer design. The results may be helpful for the reported highly viscous bioprocesses challenged by poor mixing performance and low oxygen mass transfer efficiency.

Cooperation with Hungary: with Zs. Csanadi, E. Nagy, and Cs. Sisak from the Research Institute of Chemical and Process Engineering in Veszprem and Cooperation with France with I. Nikov from Lille Polytechnics,Lille.

Reference research showed detachment conditions to become critical at shear rates > 10 000 s-1 (Sharma et al., 2005). Adherence becomes negligible and detachment trends become prevailing by 18 000 s-1. Regarding the values from CFD analysis obtained (e.g. less than 1,5.103 s-1, the Pichia membranifaciens biofilm in the practical velocity range between 2 and 8 cm/s has been regarded as stable conditions and fluid strain can be regarded as non-damaging for immobilization stability γ-1. 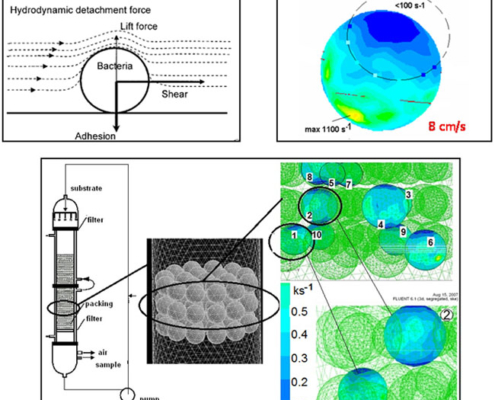 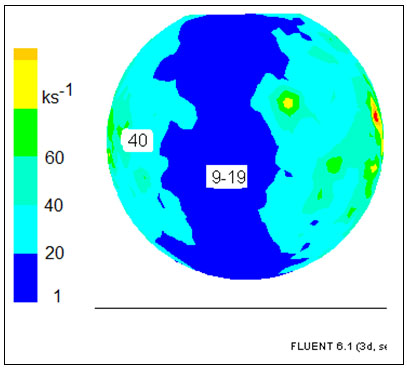